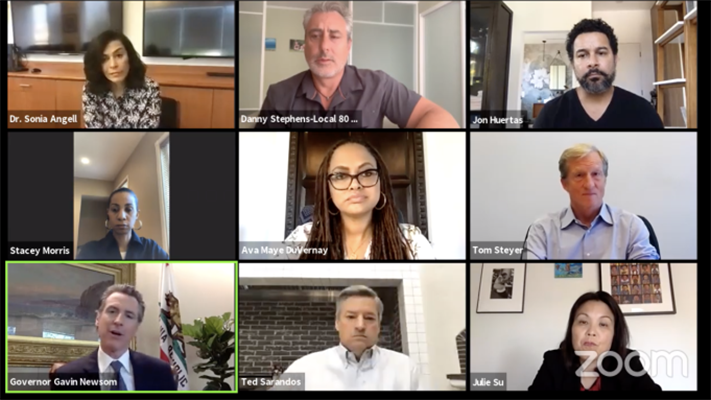 California Governor Gavin Newsom Says Production Could Restart Next Week, But Not In L.A.; Guidelines To Be Released Monday

Newsom hosted a Zoom roundtable with Californians who work in the film and television industry. It started late but, once it got going, streamed live on the governor’s YouTube page.

“We’re in realtime drafting guidelines” for specific sectors, including the entertainment industry, said the governor.

Those guidelines will be released on Monday and will allow some counties to move deeper into the governor’s four-phase plan for reopening. Newsom made clear that this includes film and TV production. But it will not likely include Los Angeles.

Huertas said he was speaking with show creator Dan Fogelman and the show may not go back into production until January in case there is a second wave of the virus.

“Emotionally, of course, we all want to get back to work,” Huertas said. “But also, the actor is going to be the least protected person on set. We can’t film with PPE on.” Huertas said he had spoken to SAG-AFTRA and it is working on guidelines for how to return safely.

Oscar-nominated filmmaker Ava DuVernay said she is “deeply affected by the challenges of my crew members.” That has her “very eager” to find a way to reopen safely.

All the segments of production have been interrupted, she said, calling it a good opportunity for “reinvention” and throwing out those pieces of the process that don’t work.

Some of the positive developments have been the advent of “virtual writers rooms, remote procedures for staff,” which DuVernay sees as tools that can be taken into the new world after reopening.

DuVernay observed that sets “are very safe places,” and noted that she is “hopeful” about what the future holds.

The big question, she said, that she is being asked by a lot of crew members is “when are we going to be able to shoot?”

Danny Stephens, a grip with local 80, said protocols need to be put in place, but raised the question of cost. “We don’t want to price ourselves out of business” and force production elsewhere, he observed.

Netflix’s Sarandos said he has over 220 productions that are “in various stages of post” at the moment. But physical production, he observed, might need to start very simply, with one to two person reality shows and ratchet up from there. We are producing in just about every single discipline, he said, and so might have a unique perspective.

Sarandos said Netflix is spending “$150 million-plus” paying the crews of the shows that are shut down. Netflix wants them to be there when things start up again, he says, so there is a mutual benefit.

He said some states are “maybe a little more nimble” in other states but that no area is “dramatically” ahead of California.

Hairstylist Stacey Morris observed that, in her profession, social distancing is not possible. She and her compatriots are “trying to figure out how to get back to work when we do get back to work.”

Dominic Patten contributed to this report.

View all posts by Lynda Mitsakos →