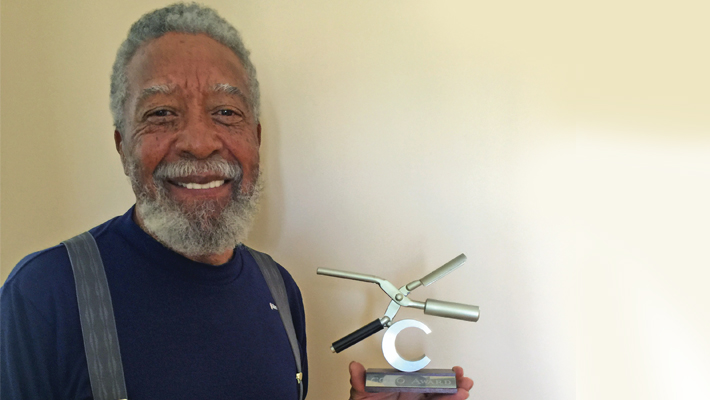 Houma, Louisiana’s native son returned home to be honored by the town, and to be inducted into the Finding Our Roots African American Museum for all his accomplishments and contributions to the beauty industry.

During Black History Month, February 2018, Gerald “Coke” Riley and his wife Dr. Gail Riley went to Houma, where he signed Coke bottles because it was a symbol of how he got his name. He also brought his famous CoCo irons to be displayed in the museum.

Growing up in Houma was not easy for “Coke,” a name given him by his family when he was a baby because he was fed through a Coca-Cola bottle. He got the nickname Coke and it has followed him throughout his adult life.

Being a young black man in the south, Coke developed strong work ethics at an early age. He recalls working alongside his father Sylvester, who was a carpenter, pulling nails from wood planks at the age of 5. He also worked as a caddy at an all-white golf course. But the one job that would change his destiny was sweeping floors and shining shoes for 25 cents in a “whites only” barbershop. He watched and studied the barbers as they cut hair, especially the women and saw potential in this trade as a profession.

When his family moved to California, he worked odd jobs at the Hollywood hotspot “The Loser’s Club,” which was frequently visited by celebrities like Eddie Fisher and Elizabeth Taylor, he watched them from afar, not realizing at the time that one day he would be working with other celebrities in the film and television industry.

In the early years, lacking direction and an unsure future, Coke hustled and gambled to survive. Finally, he enrolled in cosmetology school at Allen Beauty College where his gifts, talents and creativity explored numerous possibilities for future endeavors. He wanted to hone his skills so that he could take what he had learned to service the men and women in his community and that he did. Not only was he a hair stylist extraordinaire but a skillful businessman. He opened his first salon in Compton, California, where he set the bar high for the stylists he employed. He later would open a second salon in Inglewood where he expanded his vision and began marketing and branding his artistry. Coke incorporated and set out to inform and inspire future generations through education, motivation and innovation. He spearheaded sponsorships, produced exhibitions and trade shows. He also lent his expertise to others pursuing a career in cosmetology as a lecturer at El Camino and Trade Tech Colleges and various schools throughout the Los Angeles area.

As a creative and innovative hair stylist, Coke designed and engineered professional tools and developed an industry standard for heat styling irons. His famous CoCo irons consisted of a specially designed enclosed barrel to distribute heat evenly throughout the shaft. The design was manufactured to be used on all types of hair textures.

Constantly seeking to go to the next level in his field, he knew the importance of education, with this in mind, he joined the California Cosmetology Legislative and Educative Committee (CCLEC) where he attended various educational workshops, participated as a Board member and became the first public relations director of the CCLEC for the state of California.

Not one to rest on his laurels, Coke set out to realize his childhood dream of working in the film and television industry. He’s been fortunate enough to work in the industry giving the same creative vigor he used pursuing his career in cosmetology.  Coke, also known as “Jerry Coke” in the business, has been a member of our Local since 1991 and has put his stamp on such shows as Roc, Cedric the Entertainer, Steve Harvey, Moesha, Showgirls and Baywatch, just to name a few.

His feature credits include Amistad, Missing Pieces with James Coburn, Forget Paris with Billy Crystal and Debra Winger, Purgatory with Sam Shepard and Eric Roberts in which he received a nomination for Best Period Hair Styling – Television Miniseries or MOW at the First Annual Make-Up Artists & Hair Stylists Guild Awards.

Coke has now traded in his curling iron and scissor for his golf clubs and gardening tools. He and his wife are living their best life and enjoying the ride. Coke summed it all up when he said, “Dreams are not found; they are made.” Coke has inspired and encouraged others to follow and pursue their dreams and he has chartered a course for success, hard work and perseverance, which has brought him through and his faith in God, which has kept him on the journey and the journey is successful when it inspires others to follow.