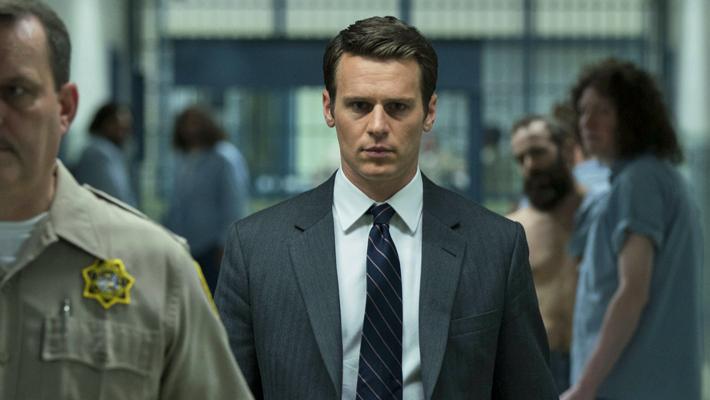 Season one of Mindhunter, the David Fincher series for Netflix, is based on a nonfiction book by John Douglas, the FBI agent credited with developing serial killer profiling in 1978 & ’79. We shot the whole series in Pittsburgh and the surrounding suburbs recreating Quantico in Virginia, a small town in Georgia, and a smaller town in Pennsylvania and Santa Cruz, CA.

We have three main characters. The first is Holden Ford, a young, wide-eyed, telegenic preppy agent whose hair Paula Ashby, the Department Head Hair, styled to suit the ’70s FBI vibe, short and neat. Fincher wanted him to be a bit thinner so I shaded his cheeks and gave him a strong jaw line using tattoo color with a dye brush and spatula flicking shading that could withstand the humidity and sweat of the Pittsburgh summer. I felt he was too young and innocent, so I painted dark circles under his eyes that got progressively darker as the season progressed and his character flirts with the dark side.

The second is Holden’s older mentor/sidekick, Bill Tench, who Fincher wanted to be gray with white walls a la Robert Mitchum. Paula first had to gray his hair, then cut an unkempt flat top to go with his unrefined personality.

Our version of The Odd Couple was joined by the third character, Wendy Carr, an academic psychologist who brings science to profiling. Paula gave Wendy a ’70s bob with blonde highlights to frame her strong, beautiful face. Michelle Audrina Kim, the key make-up artist, made sure her skin looked flawless, radiant and period without “reading as make-up” for our 6K cameras.

After establishing the main characters, we had fun recreating several serial killers who our guys interviewed. A closed prison in Greenberg, PA, doubled as The CA Medical Facility where Edmund Kemper, the 6’ 9” giant known as the co-ed killer, was housed. Actor Cameron Britton’s seriously curly head of hair was relaxed and cut by Paula to achieve a spot-on dynamic look in order to recreate Kemper. We shaped and filled in his sideburns, trimmed and parted his mustache and paled his skin to sell the fact that Kemper had been in prison for 12 years. He wore lifts to stand three inches taller and we cast very short background players as guards who walked him along the 50-foot dolly shot, through the halls of seasoned violent prison inmates. We were involved in casting for background to find extras who had hair that could be period, not an easy task in the Midwest. Paula added extensions and some wigs to get period looks in the prison. For the serial killer Brudos, Paula shaved his hairline back about an inch and thinned the front with cuticle scissors to make him appear balding. We added a 3rd Degree scar on his neck. We also recreated his fantasy shots of the women he killed and photographed hanging in pinup poses after death. We recreated Richard Speck, foul-mouthed psycho who killed seven nurses, by painting pock marks on his skin shading and highlighting to change his facial shape and cutting and greasing his hair back. We introduced the BTK killer who will allude the FBI for years, and simulated a real family who butchers another family member, dumps the body at the dump and pretends to know nothing about it until one brother confesses through sobs of real tears. Every killer and story were taken right from the book, so we were recreating real people every day. 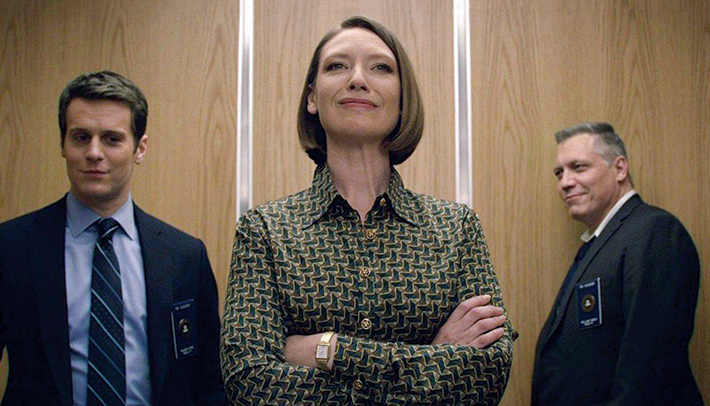 One summer day, we shot 12 hours in a diner that was 120°. The walls were sticky with years of grease, the crew was soaking wet from the humidity, the air conditioner didn’t work but you would never know it when watching the scene. I don’t know how we did it but none of the 30 people on camera showed the insane heat. There were also days when it was 35° and we were adding sweat because it was supposed to be summer in the South.

Autonomous FX made plumpers for Richard Speck, a snaggle tooth for the killer, Davier, a slit wrist wound with stitches appliance for Kemper, and a gutted prosthetic body. We applied the appliances. Jason Collins and Mike McCarty were amazing to work with. Most of the time, we did the design and tweaking by text, email and FaceTime.

David Fincher shot about 40 takes of every setup and every shot had to be a perfect continuity match. The hours were long, the schedule was grueling, the stress exhausting, but it was probably the most rewarding experience of my career. We created our own little world of sociopaths in the late ’70s.•