Photos courtesy of Netflix, except as noted

Growing up in Reykjavik, Iceland, I loved going to the movies. But never in my wildest dreams did I imagine I could be part of making movies. One of my most memorable outings to the movies was going to see West Side Story and thinking, “You mean they sing and dance in the streets in New York?!” To this day, I still love movies with singing and dancing with a bit of romance, which is why I was more than thrilled to be part of La La Land, which had all of those things, and on which I designed the looks for Emma Stone. It was through my relationship working with Emma over many years that I came to be part of Maniac.

The show is created by Patrick Somerville and directed by Cary Joji Fukunaga. It’s set in a world somewhat like—but not exactly, ours; in a time similar to—but not exactly, this one. It revolves around Annie Landsberg (Emma Stone) and Owen Milgrim (Jonah Hill), strangers who meet at a mysterious trial for a drug treatment that promises to fix anything about the mind with no complications or side effects. Things go a bit sideways from there.

When I was presented with the opportunity to head the hair department on Maniac, I read the script and was intrigued, thinking this was something quite different, with a fantastic director, writer and cast. As department head, I was responsible for creating and overseeing every principal character, including Annie and Owen, Dr. James K. Mantleray (Justin Theroux), Dr. Azumi Fujita (Sonoya Mizuno), Dr. Greta Mantleray (Sally Field), Porter Milgrim (Gabriel Byrne), Ellie Landsberg (Julia Garner), Angelica Milgrim (Trudie Styler), Jed Milgrim (Billy Magnussen) and Adelaide (Jemima Kirke).

Maniac takes the audience through many characters, reincarnations and time periods. We go through the 1940s, 1950s, the ’80s, and even a magical world of elves. It took some time to truly understand and wrap my head around the scope of it all and the massive undertaking it would be, given how many looks, changes and periods were involved. It turned out to be quite the task and joy, creating and reimagining new and different looks for multiple episodes. All of them proved to be fun and challenging and artistically satisfying.

In particular, I really enjoyed creating looks for the 1940s. I love the sculptured hair and wardrobe, and everything’s so rich and luxurious from head to toe. For that period, we wanted to make Emma’s look very glamorous and femme fatale, which was achieved with old-fashioned roller sets combed into the period hairdo of the time.

When Emma plays Linda, a nurse in 1990s Long Island, we wanted to achieve the effect of a character who had bleached and permed her own hair in the kitchen sink.

Judy Chin, Department Head Make-up, was an amazing partner. We collaborated on every character, every look and every change. We had a lot of moments when we’d first read the script and saw something like ‘elves’ and wondered, ‘What does that mean?’ We’d ask Cary and Patrick, ‘How elfie do you want to go?’ I think they knew exactly what they wanted, but they wanted us to fight for our vision, so they didn’t give a lot of direction in the early stages. We researched, put up pictures, edited and re-edited until we came up with what we believed they were going for. When we showed those, they’d typically say, “Cool, that’s great.” They trusted us to come up with the right things—they knew we got their aesthetic and liked the way we interpreted their vision.

It was a lot of work creating all of the different looks, but we didn’t have all of the designs locked down way in advance. They unfolded organically as we went along, emerging as we got one or two episodes in. I create best in the moment, and it’s so freeing to have all of the research you can imagine at the push of a button on the internet. In the past when you had to go to the library, you had to plan a bit more.

For Annie’s ‘regular’ look, I wanted her hair to be quite raw and not look as if she washes and fixes it all the time. The goal was to stay basic and still attractive but never ‘done’ since she had so many other looks that were heavily done up. I always wanted her to stay blonde through the whole thing since I thought it would be too jarring for the eye if she was in multiple hair colors. 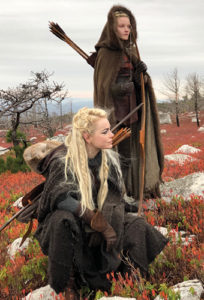 The inspiration for Emma and Julia’s look in the elf world came from Viking warriors—strong and hard-living, yet always emphasizing their natural beauty. I achieved that look with extensions, wigs, hairpieces and fabrics.

The doctors, Azumi Fujita and James Mantleray, were a lot of fun to design. Nerds in a general way can be very sexy! James wears a toupee and you also see him bald. The darkness and denseness of his hair is in the same family as Azuki’s. Her hair style was inspired by the Japanese artist and designer Rei Kawakubo, which was a note from Cary. All of the other lab characters unfolded and came together from there.

The biggest challenge on this show was the completely different looks we had to create for multiple characters in multiple periods over multiple episodes. We were always shooting while we were researching and testing and planning for the next episodes. I was inspired to design looks that would not only fulfill but maximize Cary’s and Patrick’s very ambitious vision.

One thing that helped us enormously with all of these looks is that the cast was more than happy to experiment. They were into creating the characters with us, which is really wonderful.

A lesson that I have learned throughout my career but which was most definitely reinforced on Maniac was the importance of working as a team. When you have a great partner in your make-up department and you have a great supporting team, you can achieve great work that will contribute significantly to the look of whatever given project you are on. Every one of the crew and support teams’ contributions were truly critical in executing the design and vision, and in gathering all that is required in terms of materials, research and the million little things required to see a project of this scope complexity through to such a successful result.

There is no “I” in filmmaking—it is all about teamwork … it takes a village.•

Fríða Aradóttir started her career in 1987 on Dirty Dancing. Since then,  she has worked on more than 80 films and series, including La La Land, Jurassic Park, Something’s Gotta Give, Forrest Gump, The Normal Heart, It’s Complicated, Veep and most recently, Maniac. Her work on La La Land was recognized with the Guild award for Best Contemporary Hair Styling, and The Normal Heart received an Emmy Award nomination.