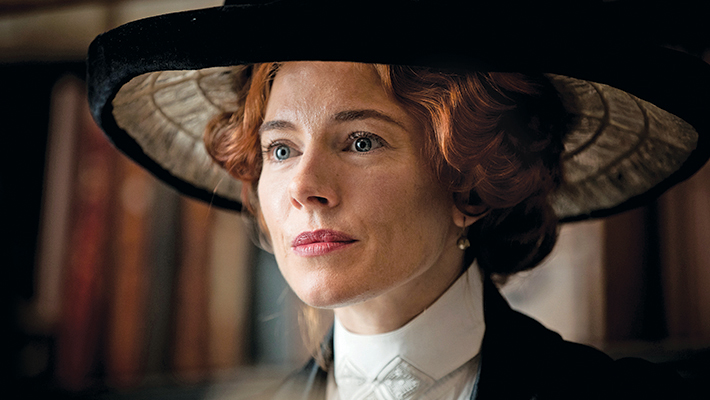 (Editor’s note: This was a European production, allowing for the term make-up and hair designer to be used, and one person doing both crafts.)

Upon reading the script of The Lost City of Z as a make-up and hair designer, I was excited to take on a story that encompassed world wars, operas, gala balls, the jungle and indigenous tribes.

My main crew was my key Clarice Grill, Lois Macintosh and Sandra O’Brien.

Many more crew would be picked up at each location. Hundreds of hair wigs were shipped from London.

The Lost City of Z follows the journey of Percy Fawcett’s three decades’ quest to discover a lost civilization in the Amazon. The James Gray film stars Charlie Hunnam, Sienna Miller and Robert Pattinson. Behind the star power, and rather right in front of your face, the make-up and hair on the screen presented challenges that proved to be a rewarding experience. Even with all modern advancements in technology and hair and make-up, the conditions demanded a back-to-the-basics approach.

As Department Head of hair and make-up, I was tasked with ageing the main cast—a trio of handsome and beautiful actors in their 30s. Charlie Hunnam, Sienna Miller and Robert Pattinson aged into their 50s with grace and without the use of CGI in post production. Charlie’s 20s look was wonderful. We first see Charlie’s character, Percy Fawcett, in his early 20s. To capture the 1900s period look, we created a short back and sides military image. It was longer at the top with slicked backs at the sides. I created this with John Masters Pomade. I would use a hot facial curling tongue and a product (ironically named) Percy Fawcett Moustache Wax, made from a natural bees wax mixed with essential oils, kept the moustache stiff and cut out on the side. A very light-tinted moisturiser was used to made him appear slightly pale.

Charlie’s 30s and jungle look were created as he entered the jungle. His facial hair was allowed to grow, hair was slicked back of his face, a tan was applied with a Chanel bronzing cream and light airbrush spray with by Terry Tea stain-bronzing liquids. Charlie’s ageing look was challenging. After speaking to James Gray and Anthony Katagas, our amazing director and producer, in the early stages, we looked and tested different avenues for the ageing progress. In pre-production, we explored using prothetic pieces around the eyes and the jaw. My special effects and prosthetics specialist, Kristyan Mullett, created prosthetic silicon pieces.

We were working in really hot conditions. I knew we would go in a guerrilla crew and travel by a small wooden boat up the river and hike through the jungle. This meant that any complicated sensitive silicon pieces would be hard to maintain in the humidity and heat. We decided to opt for the old-fashioned way of old stipple latex, painting highlights and shadowing. We created microscopic fine lines and old-age blemishes.

Charlie’s skin was prepared with Kiehl’s Blue Astringent Herbal Lotion before applying multiple latex layers on his face and neck and hands. Bluebird Old Age latex is a great product for this and we used Ben Nye Transparent powder. Then, we used the Illustrator palette and the Canon Collective gels and liquid to stain and paint his face and neck. Blue Marble spray sealed in the make-up. I used dry shampoo with a slight white shade by Klorane to take off the shine and give it a slight matt or dull effect. The hair was then slicked off his face to expose his temples, giving it a receding hairline using Gaf Quat. I used the hair illustrator with the colours of silver, white and yellow to draw on a grey hairline.

Special contact lenses were designed for Charlie and Sienna, where the white of the eye was slightly yellowed with very fine red lines to make his piercing blue eyes slightly on the milkier side. This made their eyes look older and tired as they aged. Sienna Miller’s character, Nina Fawcett’s style and look, had to vary from a Gibson 1900s hair style which I modernized from her 20s look of finger weaves. After numerous tests, Sienna’s hair was changed to a strawberry-red tone. For her hair styles, we added some same tone switches, thus creating different styles and providing the illusion that her hair was very long. We changed her make-up and hair styles according to her costumes. We used Burberry make-up—especially the lip colour tones. A light-tinted moisturiser by Burberry for her skin tone created some English rose cheek stain by Tarte. For her ageing make-up, we used the same technique as Charlie’s.

Robert Pattison grew his beard for weeks before shooting, so we had a good length beard to work with. To show the transformation of his journey, his character, Henry Costin’s beard, was darkened for scenes in England and lightened from the sun in the jungle, by reversing the colour and leaving Robert’s natural tone. In climactic jungle scenes, Robert’s character becomes infected by maggots—the wound worsens to an open cut, infected by maggots.

Lois Mcintosh applied Pro Bond pieces and build it up with a 3D around his nostril line and just before camera would roll, we added live maggots. For his older look, grey hair was laid into his beard and temples and latex stipple around his eyes.

To achieve this for the younger look, we used his natural wave of his own hair and enhanced that wave with a curling activating product by Redken. For his older look, we wanted to make him look like his father, so we had a very tidy moustache made by Sarah Weatherburn and straightened and slicked his hair back with Gaf Quat.

The Columbia location created its own set of challenges with regards to weather, customs laws and just plain luck. Every day was a journey—an act of God or some high drama. We survived two flash floods, an exploding bus, lightning strikes, hurricanes, protests by locals and being eaten alive by mosquitoes. There were walks through the Amazon in the dark of night with torches and performing touchups and checks on the actors in with water up to our waist in extreme heat. My experience in working in hot conditions allowed me to troubleshoot the challenges: traveling with prosthetics through the jungle with a limited crew, via boat and hiking would be difficult and hard to maintain. To add to the challenges, Colombia has a strict immigration policy—our products contained alcohol and chemicals and were held up at customs. The indigenous actors hired were football/soccer fans and arrived on set with short hair with designs carved into their heads and tan lines on their arms and legs. We needed them all to have long hair so we had to innovate and prepare hundreds of wigs. 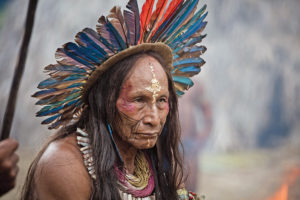 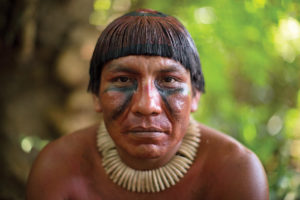 My make-up strategy was to paint their bodies with a silicon-based paint that was sweat-proof to retain continuity under extreme heat. However, all our silicon and special body paint was held up at customs for weeks before we had it cleared. This forced us to troubleshoot and take a back-to-basic approach of gathering charcoal in the woods.

Cheese grating it into a fine powder and mixing it with Mac Pro chrome pigment. We added dried berries and clay oils to create a paste of the same texture as the indigenous people would use to paint their badges. Brushes were tied together to create even lines to apply the authentic indigenous tribal markings. The Red Syria is an actual tribe from Brazil and Bolivia and its trademark is that the whole body is bright red with faces and feet painted black with war paint. The hair would be a pudding bowl style, very slick and shiny style. We used very cheap arctic wigs and cut the hair into a pudding bowl style.

We put them on hair blocks and pulled floor varnish over it and let it dry for days in the sun until it was solid and shiny. Then we would paint patterns over the wig before fitting them onto our actors. 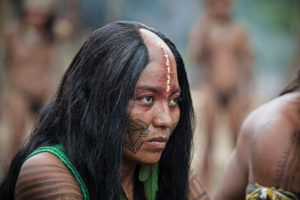 Kayapo is a sophisticated warrior and spiritual tribe in the film. For the finale, we painted very fine asymmetric patterns and lines all over their bodies and faces. Women had their hair parting shaved off and we used gold leaves to decorate their faces. We then made very small bold cap strips and attached very fine strips of hair wefts into a triangle shape and attached to their real hair.

For the Guyaro tribe, we used a combination of white clay or a berry clay to put patterns onto their bodies and used feathers to put very fine lines onto their faces.

For the opera scenes, 16 white Marie Antoinette wigs were required. Torrential rains caused flooding and the wigs to float in our tents.

The Lost City of Z was not only a new experience for us, but a humbling and learning process, too. Every film presents unique challenges and in this case, required problem-solving solutions under extreme conditions and remote locations. It was a true adventure and regardless what happened that day, we would at the end of the day, all sit together, have a beer and laugh about our extraordinary day. We knew how lucky we were to do what we love—to be creative and travel the world. •