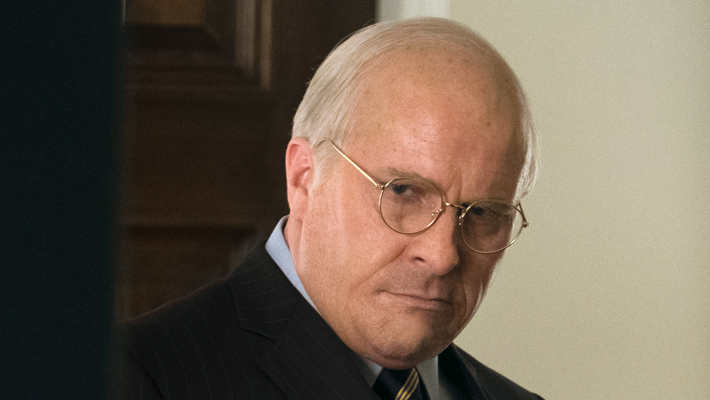 Brushing up on  History

The transformation of Christian Bale into Dick Cheney was a magical  collaboration of artistic talent, and three-time Oscar® winner Greg Cannom calls the experience “one of the best” of his distinguished four-decade career.

The adventure started with a phone call. Producers Jennifer Madeloff and Jeff Waxman had a project called Vice, the story of Dick Cheney’s 50-year ascent from Washington bureaucrat to the most powerful vice president in our nation’s history.

Bale was slated to play the lead role, and the question was, could Cannom make the actor look enough like the historical character to satisfy the actor. Neither artist, nor producer truly knew if the desired illusion was achievable, so a make-up test was decided upon.

This is when Cannom will tell you that the collaborative magic began. He ran the project through Department Head Special Make-up Effects Chris Gallaher’s shop, where the talented Brian Wade and Cannom sculpted the initial test make-up.

The prosthetic pieces were made of a silicone material that was originally co-created by Cannom and special make-up effects artist Wesley Wofford. This innovation in prosthetic material garnered the pair a Technical Achievement Award from the Academy of Motion Picture Arts and Sciences in 2005.

Gallaher lent his talent by fabricating the lower dental appliance to be worn by the actor. Wig makers Justin Stafford and Stacey Butterworth were tasked with the creation of the lace front wigs that the transformation necessitated.

Cannom and Gallaher applied the test make-up on the actor, who had never worn prosthetics.  Bale arrived excited to see if the illusion he envisioned for the character was obtainable, so he happily sat down for the test that would decide the issue.

The artists used an airbrush to deftly and realistically color the prosthetics with a combination of the Tuttle PM and PPI tattoo colors. MelPAX was also used to mute the residual blue of the actor’s shaved head.

The make-up wasn’t perfect that day, but it was a huge success nonetheless. Bale enthusiastically took on the persona of the vice president during the show-and-tell with the film’s producers and its director, Adam McKay. The synergistic effect of Bale’s performance and Cannom’s design convinced everyone that they could meet the challenge.

Many make-up tests followed as the actor and make-up artist hammered out the looks needed to portray the progression of aging that the storyline called for. This collective effort resulted in a design that not only looked realistic on film, but actually fooled the human eye from just a few feet away. An achievement that Bale and Cannom both have come to share equally with one another.

Cannom points out that his team’s artistry does not stand alone. He is quick to credit the other excellent artists who lent their talents to the project.

Patricia DeHaney, Department Head Hair, and key hair stylist Karen Asano-Myers did the final styling on all the character’s wigs. Both artisans working to perfectly tweak the ventilated hair and expertly trim the lace for a flawless look and fit.

And last, production tabbed Kate Biscoe to be Department Head Make-up. Biscoe lead a crew that handled the other 150-plus scripted speaking roles, as well as the myriad of background performers with her usual artistic and professional aplomb.

Cannom approaches every project with one simple question. “What would Dick Smith do?” and it has fueled his career goal to design a realistic old-age disguise make-up that would have impressed his mentor and friend. Cannom feels that with this make-up, he has finally achieved this goal. •